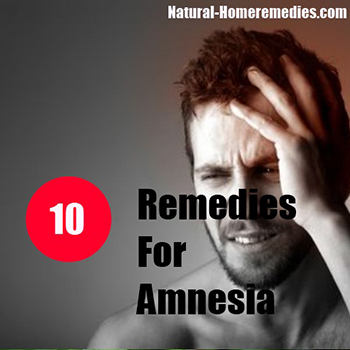 There are several symptoms associated with the development of amnesia. The inability to learn new things is the major symptom of this condition. Deterred ability to recall events from the past is also known to occur in those who suffer from amnesia. In many cases, the affected individual may also suffer from confusion at certain intervals. Tremors and seizures are also common symptoms of this condition. In certain cases, a person may also suffer from false recollections of past events. However, it is important to note that it is not necessary that a person may suffer from these symptoms. Short-term memory loss is the most common symptom of this condition. However, in certain cases, a person may suffer from long-term memory loss in which they may forget past events, up to a few years. In some cases, the affected individuals may even forget their identity.

The occurrence of a head injury is one of the most common causes of amnesia. However, it is important to note that a head injury does not usually result in severe amnesia. The serious form of amnesia, also known as dissociative amnesia, may develop as a result of trauma. Lack of oxygen in the brain, that may occur as a result of a heart attack, can contribute to the development of amnesia. The development of tumors in certain regions of the brain that are responsible for memory may also cause this condition. There are also certain medications that may contribute to the development of this condition. Such medicines include benzodiazepines.

Gingko biloba is an effective herb that has been used extensively in Chinese medicine to boost memory. According to a research study conducted by the UCLA Brain Research Institute, individuals between the ages of 45 and 75 who suffered from memory loss were given 120mg of this herb two times each day or a placebo for the next six months. 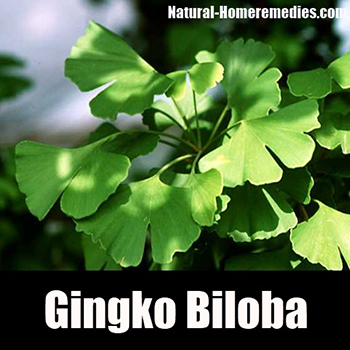 At the end of the six-month period, those who consumed gingko biloba experienced a greater improvement in tests that measured their verbal recall ability. According to the University of Maryland Medical Centre, the most effective dose for treating memory loss is 240 mg of this herb or greater, in a day. It is important that you seek medical advice before taking this herb, especially if you are taking anti-depressants, blood thinners or anticonvulsive medications.

Gotu kola is a popular herb that is a part of the parsley family and has been used extensively to treat problems such as abrasions and psoriasis. The University of Maryland Medical Centre states that gotu kola possesses triterpenoids that are beneficial in reducing anxiety and mental alertness. Gotu kola can be consumed as a tea, capsule or tincture. 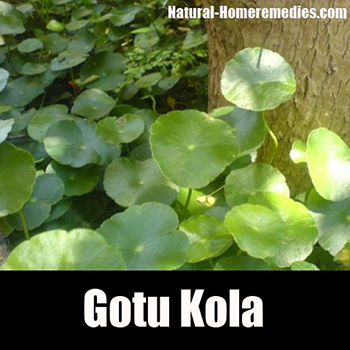 Gotu kola supplements are very common and are easily available at any health food store. It is important to note that consuming gotu kola can have a negative impact on the liver. Therefore, it is imperative that you consult your physician before consuming this herb for longer than six weeks. Those who already suffer from liver disease should abstain from using this herb. This herb is not recommended for children. 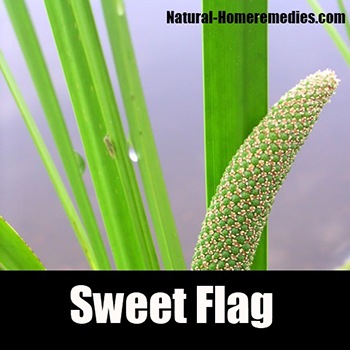 In the book 'The Holistic Herbal Library', herbalist Penelope Ody states that vacha is an herb that is helpful in boosting memory and increasing mental alertness. It is highly recommended that you do not use this herb for more than 30 days continuously. 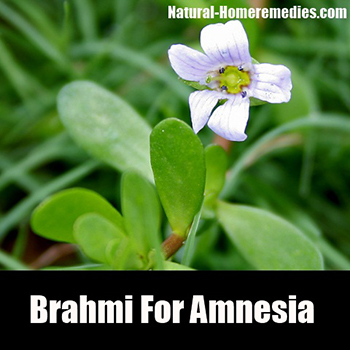 Brahmi, commonly known as Bacopa monnieri, is an herb that is helpful in treating amnesia. This is due to the fact that it is helpful in boosting memory as well as improving cognitive impairment. Botanist M. Daniel states that this herb possesses anti-anxiety properties and helps in boosting intellect.

Ginseng is an herb that is considered effective in treating amnesia. In the book 'Healing Herbs', the author Michael Castleman states that ginseng is a root herb that may be helpful in boosting memory as well as physical stamina. 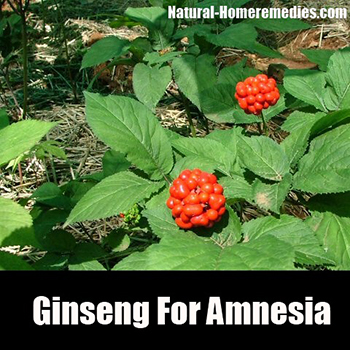 According to a research study conducted by the National Centre for Biotechnology Information, it was observed that a combination of gingko biloba and ginseng helped in improving memory in middle-aged individuals over a 12-week period. In certain cases, the consumption of ginseng may also result in certain side effects such as high blood pressure, diarrhoea, sleeplessness and elevated blood sugar. It is important that you avoid using this herb if you suffer from conditions such as high blood pressure, asthma, emphysema, hay fever, insomnia or cardiac arrhythmia. 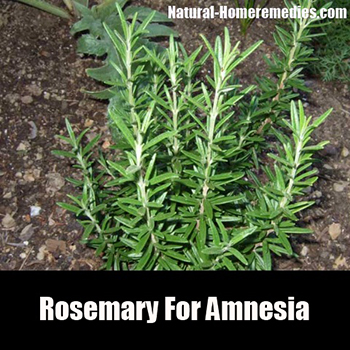 Rosmarinus officinalis, commonly known as rosemary, is an herb that is used as a culinary spice and an effective treatment for several health conditions. The University of Maryland Medical Centre states that rosemary is an herb that is effective in treating loss of memory. The dried leaves of this herb are used in preparing herbal medications that can be taken orally. However, the oil derived from this herb must not be consumed orally.

Green tea is considered to be one of the most effective remedies for treating a host of health ailments. Green tea is known to possess catechins, which are compounds that help in boosting memory. 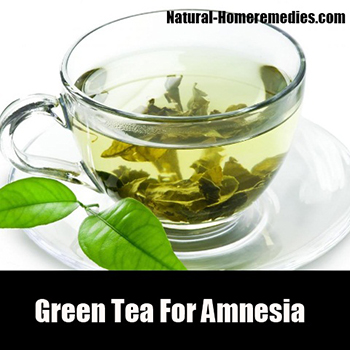 According to a research study published in 'Journal of Nutrition' in the year 2006, the catechins present in green tea were given to rats along with water. The results were that those rats were able to run the maze faster and were able to remember the maze better, in comparison to other rats that were not given this tea. 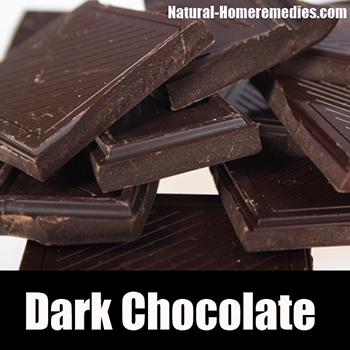 Dark chocolate is known to be helpful in the treatment of amnesia. This is due to the fact that it possesses flavonoids and caffeine, which are the components responsible for increasing the flow of blood to the brain. This helps in improving memory and alertness. Dark chocolate is considered a natural stimulant that is helpful for boosting memory as it increases concentration and boosts the mood of the person. However, it is recommended that you consume dark chocolate in small amounts to prevent weight gain and sleeplessness, which happens due to the presence of caffeine. 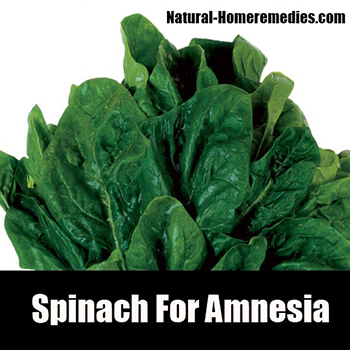 Spinach is known to possess folic acid, vitamin B6 and B12, which are helpful in protecting the nerves of the brain from damage. Spinach is also known to play a crucial role in synthesizing red blood cells that are responsible for transporting oxygen as well as other vital nutrients to the brain.

In most cases, foods that contain a high amount of fats are not recommended for those who suffer from amnesia. 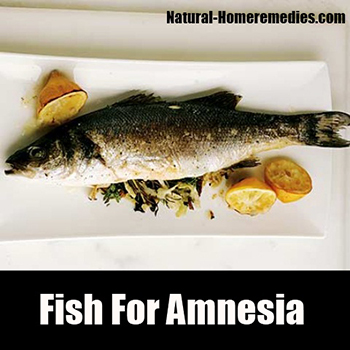 However, it is important to note that fish contains a high amount of good fats, also known as omega 3 fats, which are known to be helpful in boosting cognitive function.

Other Home Remedies for Amnesia

Fruits and vegetables are known to possess a high amount of anti-oxidants that are helpful in protecting the body from damage caused by harmful free radicals. The USDA states that fruits and vegetables rich in antioxidants play a crucial role in the proper functioning of the brain. Fruits and vegetables that boost cognitive function include strawberries, cherries, oranges, artichokes, spinach, asparagus, potatoes, red cabbage, blueberries, raspberries and black plums.

After the digestion of foods that contain protein, amino acids are released into the bloodstream and travel to the brain. Tyrosine is an amino acid that is helpful in boosting the production of dopamine and epinephrine, which are brain chemicals that improve memory. Consume protein-rich foods such as fish, lean meat, skim milk, eggs and legumes at each meal to meet your daily needs. Aim at consuming around 1-1.2 grams of protein per kilogram of bodyweight.

When it comes to treating amnesia, it is highly recommended that you abstain from consuming alcohol. This is due to the fact that alcohol plays the role of a depressant, which results in slow reaction time and confusion. Brown University Health Services states that women are at an increased risk of suffering from the adverse effects of alcohol as compared to men. This is due to the fact that a woman's body contains less water in comparison to a man's body, thereby reducing the ability of their body to dilute alcohol.

Amnesia is a condition that occurs mostly as a result of damage to the brain. Therefore, it is extremely important to prevent the occurrence of brain damage. To prevent the occurrence of amnesia, it is highly recommended that you reduce the consumption of alcohol. When cycling or skate-boarding, it is advisable that you make use of a helmet to prevent any head injury. If you begin to experience symptoms of a stroke or brain aneurysm, it is highly recommended that you seek medical advice immediately. Common symptoms of these conditions are paralysis, numbness of one side of the body and severe headaches.

Other Treatment Options for Amnesia

B vitamins are considered beneficial for memory. Folic acid, also known as folate, is considered effective in the treatment as well as prevention of amnesia. This is due to the fact that it lowers the levels of homocysteine in the blood. Homocysteine is an amino acid that is toxic in nature and causes damage to the brain cells, thereby resulting in loss of memory and impaired cognitive function. Foods that contain high amounts of folic acid include fortified cereals, whole wheat bread and orange juice. Vitamin B6 and B12 are also useful in producing red blood cells that may help in supplying oxygen to the brain, which is required for the optimal functioning of the brain in those who suffer from amnesia. Foods that contain a high amount of these vitamins are meat, fish, poultry, milk, potatoes, fortified cereals and green leafy vegetables. Vitamin C is also effective in treating amnesia as it plays the role of an antioxidant that helps in preventing the brain cells from damage caused by free radicals. Brain damage is known to result in decreased cognitive function and loss of memory. Food sources of vitamin C include cherries, apples, watermelon, carrots, avocados and beets. Vitamin E is also considered effective in treating amnesia as it prevents the brain from damage by free radicals. The Council for Responsible Nutrition (CRN) states that vitamin E may prove to be beneficial in boosting cognitive function and can also prevent the occurrence of dementia in the elderly.